Chalk portrait of Caravaggio by Ottavio Leoni, circa 1621.

Although Caravaggio and his art may be forgotten for almost three hundred years, it can safely be said that since the beginning of the 20th century this oversight has largely been compensated for. Despite his dismissal by critics (was it not Poussin who stated that he came in order to destroy painting?) and his fall into oblivion, his name seems to have reappeared in collective memory during certain periods of history. 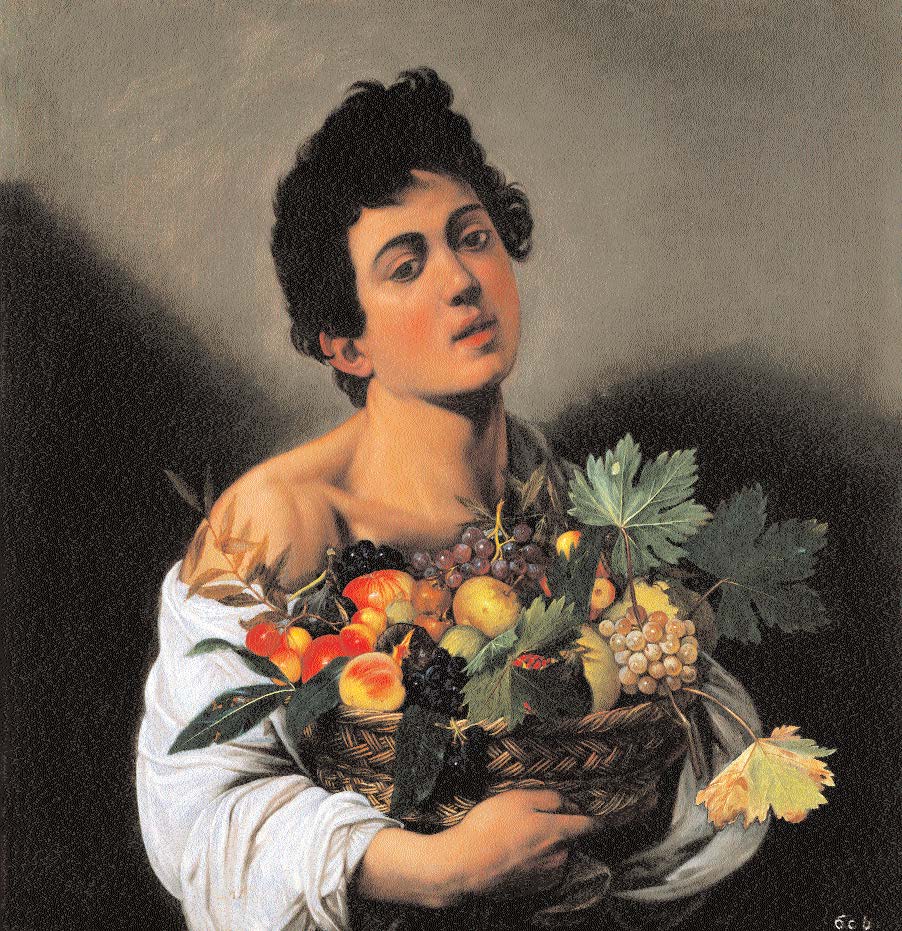 Even in his own time, a contemporary of Caravaggio, Giovanni Baglione recognised the artist’s importance as a discoverer of a distinctly modern style1. Despite stating that Caravaggio had a great desire for the “approval of the public, who do not judge with their eyes, but look with their ears”, and that he had urged many younger artists to pay attention to the colouring alone instead of the composition of figures, Baglione described Caravaggio’s works as “made with the greatest diligence, in the most exquisite way”. Caravaggio’s patron, Marchese Vincenzio Giustiniani di Bassano (1564- 1637), never doubted Caravaggio’s genius during the artist’s lifetime. In a letter to the advocate Teodoro Amideni he quotes the painter, reiterating a point of view that he found conclusive2: “as Caravaggio himself said, a painting of flowers requires as much care as one of people” — “of the highest class of painters — we have Caravaggio”. Caravaggio painted his “Cupido a sedere” (Amor Victorious, p. 89) for him, and when the altarpiece of Saint Matthew for the Capella Contarelli in the Church of San Luigi dei Francesi was rejected by the congregation, it was the Marchese who acquired it3. The art historian Giulio Cesare Gigli indulged in extravagant praise for Caravaggio in the pittura trionfante about his art: “This is the great Michelangelo Caravaggio, an aweinspiring painter, the marvel of art, the miracle of nature”4. In the 18th century, the director of the Spanish Academy in Rome, Francisco Preziado, described the artist, in a letter to Giambattista Ponfredi dated 20 October 1765, as the founder of a school to which Ribera and Zurbarán also belonged5. During the age of Classicism, sporadic attention was paid to the artist and his tumultuous life, but it was during the Romantic era that particular interest in this pioneer of the Baroque was aroused. The great philosopher Schopenhauer (1788-1860) acknowledged the importance of his work6, but from an expert point of view it was Waagen (1794-1868), professor of Art History, who sought to describe Caravaggio’s characteristics7. As an art historian, Manasse Unger (1802- 1868) then carried out studies in a more academic vein on the artistic effects of the painter in his Kritische Forschungen (Critical Research)8, and wrote Caravaggio’s biography9, which was as complete as it could be at that time, according to J. Meyer’s historical judgement. It was the art historian Eisenmann who later tried to make sense of the fluctuating criticism concerning the importance of this artist10. A literary portrait of Caravaggio was published by the historians Woltmann (1841-1880) and Woermann (1844-1933), putting the artist within the historical development of painting11. Strangely reserved, but thus causing all the more excitement, were the few but grave words of art historian J. Burckhardt (1818-1897), which appeared in a dedication to the artist in the first edition of Cicerone, and which was barely altered in later adaptations of this work12. Meanwhile, modern painters such as Théodule Ribot (1823-1891) had already sided with the master of the Baroque with their theories on art, deliberately searching for a way to preserve the intentions of their French Caravaggio, the master Valentin de Boulogne13. Only an objective historical look at the artist and his works and the recognition of a psychological dimension to his oeuvre were missing in order to penetrate beyond literary enthusiasm to Caravaggio’s immortal merits.

The life of Caravaggio has given rise to numerous biographical interpretations, all focused on the violent and extravagant personality of the painter. One of these, written in the form of a poem, is the famous Notizia by Mancini (the translation of which appears towards the end of this book), which relates the major events in the life of Caravaggio. According to this poem and other various historical sources, Michelangelo Merisi was born in September 1571, probably the 29th, the feast of Saint Michael the Archangel, in Milan where his father worked for Francesco I Sforza, Marchese of Caravaggio. The predisposition for painting which Caravaggio demonstrated at an early age could have been inherited from his father who was, as Mancini states, “foreman and architect to the Marchese of Caravaggio”. This contradicts the writings of Bellori (of which there is also a translation towards the end of this book) according to whom Caravaggio, whose father was a mason, like his contemporary Polidoro, would have, from a young age, carried the buckets of lime and plaster used in the making of frescos. It seems rather probable that Caravaggio inherited a fine talent from his ancestors although certain biographers have minimised its significance. His parents were honourable citizens. As an employee of the Marchese, his father enjoyed a certain protection, from which Caravaggio would benefit throughout his life. In 1576, the plague that swept the Duchy of Milan forced Michelangelo Merisi’s family to flee the city. They moved to the small town of Caravaggio where Michelangelo spent his childhood. Several months after their departure from Milan, Michelangelo Merisi, then aged six, lost his father. Seven years later, on 6 April 1584, Caravaggio began his apprenticeship in the studio of the painter Simone Peterzano in Milan, where he studied with diligence for four or five years. He already showed some signs of extravagance, caused, it is said, by his excessive and hot-tempered personality.